just got their Xmas supplies off the containers, a full month late - straight into the 75% odd bargain bin. They had gotten their Halloween stuff in mid Dec. talk about a recipe for losing tons of money when you have to clearance everything…

With normal markups, it’s more like not making profit than losing money. Which is probably in itself viewed as a victory in some circles.

That’s right!!
Just got new wheels and that car is now the most beautiful sweetest vehicle

And why should I not complain about gasoline prices??

I actually have another gas guzzler. A John Deere driver lawnmower.

A near insider, Former Federal Reserve Governor Randal Quarles was on the team until last month. He commented earlier today that he thinks the Fed will move swiftly to raise its policy interest rate above the inflation rate because that is the only way to defeat inflation

If this guy is right, just think of the increase in interest rates it will take to reach the current inflation rate!!

Fed will raise its policy interest rate above the inflation rate ‘sooner rather than later,’ says ex-governor Quarles

A near insider, Former Federal Reserve Governor Randal Quarles was on the team until last month. He commented earlier today that he thinks the Fed will move swiftly to raise its policy interest rate above the inflation rate because that is the only way to defeat inflation

This is merely damage control. When you’re paniking over a possible 5% spike in rates, a quarter or half point rise becomes a relief. Predict the worst, then everyone will be happy with reality.

This is merely damage control. When you’re paniking over a possible 5% spike in rates, a quarter or half point rise becomes a relief. Predict the worst, then everyone will be happy with reality.

Not sure how much damage control it is though. Floating 5% rate hike sounds desperate. Makes people wonder. Wow the proverbial you know what must have hit the fan harder than I thought for the Fed to consider anything north of 1%.

Wow the proverbial you know what must have hit the fan harder than I thought for the Fed to consider anything north of 1%.

It is unimaginable to most, so they dont really even react to such a comment (there’s the initial

, then reason kicks in). But it still seeds the range of expectations, so whatever increases there are appear much milder and will be less of a shock.

As opposed to predicting rates could quickly jump, say, a full percent, which is something within reason. That’s the number you dont want kneejerk reactions to, because those reactions will be as if they really think it could happen.

And why should I not complain about gasoline prices??

Do pack-a-day smokers complain about cigarette taxes? Probably. But nobody is forcing them to smoke.

That old red Porsche is pretty fuel efficient, unless Patty has a lead foot.

Just finished watching the Bloomberg Fed special broadcast . . . well . . . . most of it anyway. Had to clear my Bloomberg cookies a couple of times when they said my allowed time had expired and they kicked me off. Anyway:

Bottom line, after all the blah blah blah, my sense is that inflation is gonna be with us for a while. Am feeling really good about my prospects vis a vis the I bond rate reset this spring, for example.

Powell said he wants to achieve a 2% inflation rate in future. But he is for certain not breaking his neck trying quickly to get there. Powell reiterated additions to the Fed balance sheet will halt in March. BUT:

They are going to stand pat for a while after that. If you were thinking “unwinding” straightaway following the halt, that does not appear to be in current Fed plans.

Powell did make clear the Fed will react to developments later in 2022. But his hair was definitely not on fire regarding our current, ongoing, 7% inflation.

Add to the above something not discussed by Powell or mentioned by his questioners during the ensuing Q & A:

There are at present three openings on the FOMC which Biden must fill. That number could increase by two before year’s end. And Biden is nominating strong doves, something which mitigates against a vigorous inflation battle moving forward.

Powell did make clear the Fed will react to developments later in 2022. But his hair was definitely not on fire regarding our current, ongoing, 7% inflation.

I wonder how much of that is because the stock market is already in correction territory so he did not want to appear panicked about the inflation. Or maybe he remembers fondly the 70s…

LOL. This is getting serious! 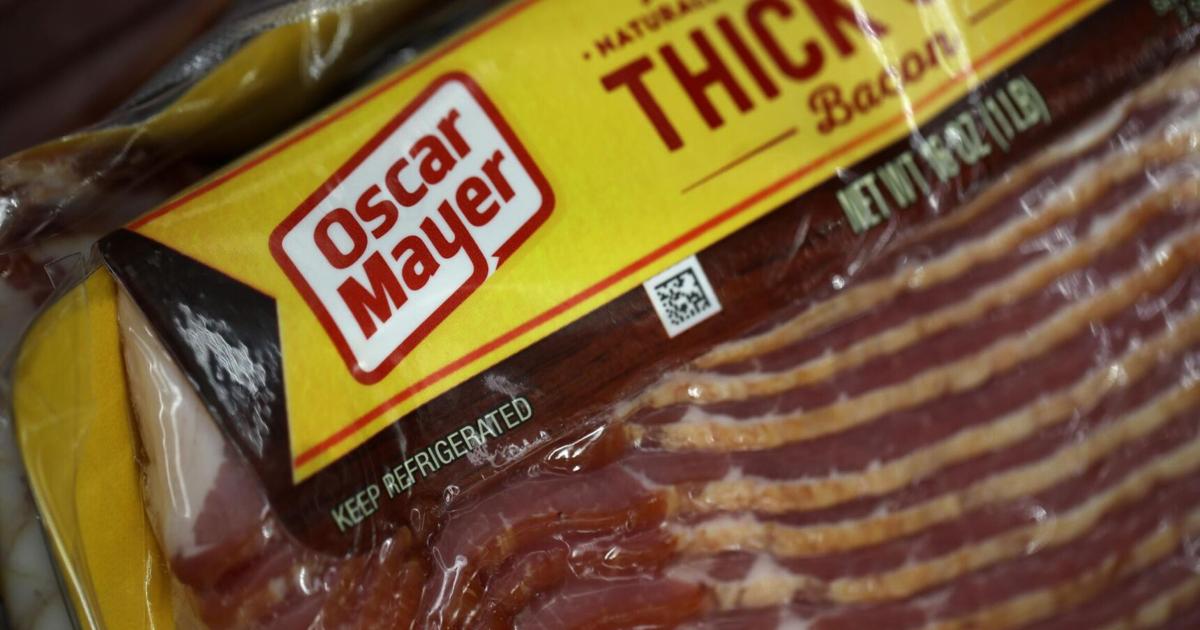 The makers of top food and consumer goods brands plan to raise prices in the spring, dashing shoppers' hopes for a quick drop in their grocery bills.

This is getting serious!

Since it is hitting health food, we’ll now get some action from the ruling party.

Since it is hitting health food, we’ll now get some action from the ruling party.

No kidding! It’s becoming so expensive people have to decide between using their bologna face masks normally or just eating them. It’s that bad.

This is a Bloomberg piece which appeared late Saturday night:

Jerome Powell’s hawkish pivot makes it clear that a key crutch of support for the global economy is going to be pulled away sooner than financial markets had been betting.

Counterparts are also ending or slowing the bond-buying which accelerated in the coronavirus recession with some even looking to reverse it.

The Bank of Canada last week signaled it could tighten monetary policy in coming weeks having ended so-called quantitative easing in October. Markets are betting the Bank of England will lift rates on Thursday to the level it has said it may begin shrinking its portfolio. The Reserve Bank of Australia is projected to announce an end to its bond-buying program when it meets Tuesday.

All told, Bloomberg Economics expects Group of Seven central banks will add just $330 billion to their balance sheets this year, a sharp drop from the more than $8 trillion added during the pandemic in a bid to ease markets, contain borrowing costs and spur demand and risk-taking.

That lays the groundwork for the G-7’s combined portfolio to peak in the middle of this year at around $27 trillion, an amount that would have been unimaginable before the 2008 financial crisis when bond-buying became a key tool for most monetary authorities.

A key question is what does the exit from QE mean for the world economy. If it enables central banks to get on top of rampant inflation, then it could help extend the recovery from the 2020 slump, especially if it acts as a substitute for higher benchmark rates.

But if the process ends up roiling markets, it could have the opposite effect by cutting off the flow of credit to consumers and businesses, hitting their confidence.

“If central bank rates alone were increasing [rates], but quantitative easing was staying in place, this would provide at least some liquidity support to asset prices,” said Freya Beamish, head of macro research at TS Lombard. With the liquidity tide turning, “there is no cushion to fall back on.”

That sets the scene for a divergence as major central banks in the English-speaking world look not only to stop quantitative easing but begin quantitative tightening, the term given for shrinking balance sheets, while others keep on easing monetary policy.

Japan remains wedded to stimulus even as it slows the pace of its asset purchases and the European Central Bank is seen as being still more than one-and-a-half years away from raising rates although it too is reducing net purchases.

Meantime China, which avoided QE through the crisis, has switched to stimulus mode to cushion the economy from a property slump.

While that’s a consolation, it hasn’t stopped financial markets from turning skittish about the pending withdrawal of liquidity. The MSCI World Index is already down 7% so far this year. Gaps between short- and longer-term bond rates have collapsed, with the U.S. Treasury yield curve at its flattest since March 2020.

Economists at Barclays warned that “financial markets remain on edge over the potential for excessive tightening.”

Goldman Sachs Group Inc.’s financial conditions index – a measure that incorporates variables like stock prices, credit spreads, interest rates, and the exchange rate – has moved upward to reveal the tightest level since March. However, it’s still well below the extreme reached at the start of the pandemic as markets spiraled.

When the Fed started quantitative tightening in 2017, it had been raising rates for more than a year and it never directly sold assets, reducing its balance sheet by curbing reinvesting existing holdings of Treasuries as they matured.

Back then, Fed Chair Janet Yellen likened the process to “watching paint dry.”

This time, there is more concern about paring the balance sheet at the same time as rates are going up. QT could be announced in July or even sooner and the central bank could eventually sell some of the mortgage-backed securities it owns, according to economists.

Signs of a slowing recovery came last week when the International Monetary Fund cut its growth forecast for 2022, citing weaker prospects for the U.S. and China along with persistent inflation.

A cautionary story from a small country with too much debt. They tried rationing food as well as banning many imports to conserve hard currency. Now inflation is running very high and parts of the economy are shutting down. Supermarket shelves are bare and restaurants cannot serve meals, but Sri Lanka’s economic crisis is a bonanza for used auto dealers, with vehicle shortages pushing prices higher than a house in a nice area. The island nation of 22 million is on the...

A five-year-old Toyota Land Cruiser was on offer online for an eye-watering 62.5 million rupees (US$309,654) — triple the pre-ban rate, and enough to buy a house in a middle-class Colombo neighborhood or a new luxury apartment in the city center.

I don’t fully understand what’s happening in Sri Lanka, but it sounds like their government debt is foreign-currency denominated, so debt payments are made using those currencies. But their foreign currency account balance started running low (perhaps caused by tourism shut down and fewer exports due to COVID?), so they implemented import controls to slow the outflow of foreign currencies, so they can continue to make debt payments. Just one of Biden’s many contributions to runaway inflation.

FED’S BULLARD: I THINK MARKETS PRICING IN FIVE HIKES THIS YEAR “IS NOT TOO BAD A BET”

FED’S BULLARD: I DON’T THINK INFLATION WILL MODERATE MUCH BEFORE MID YEAR