Biggest Abortion Case in 29 Years at the Supreme Court

The most significant abortion case in several generations - that will likely result in significant changes to our country’s abortion jurisprudence and open the door to new state laws restricting abortion - was argued last week at the Supreme Court. I haven’t had a chance to listen to the audio yet, but it is on my to-do list this week. Anyone else here regularly listen to SCOTUS audio for the big cases and also listen to this one (maybe I’m more of a nerd than I realized)? What did you think?

What did you think?

It has the pro-death crowd riled up, that’s for certain. And since that includes almost every member of the American mainstream media, it’s fascinating to witness their angst and their pro-death cackling.

And of course the Democrats are spouting off about passing pro-death legislation. That cannot happen unless they first do away with the filibuster.

There is one concerning aspect:

The SCOTUS can be expected to release its decision roughly four months prior to the 2022 midterm elections. If they come down on the side of life, at least on a state by state basis, that could trigger backlash among pro-death women who would then support the Democrat death mongers. I don’t like this timing one bit.

There’s always a congressional election right around the corner, so if you think like that, it’s never going to be good timing. I think the timing is great because it’s being done a few years away from the presidential election. The hard left cares way more about abortion than the center left, and even if SCOTUS completely guts the right to abortion, I think the democrats will have a hard time getting centrist voters to become single issue abortion voters and vote for them just because they might put more Sotomayors on the court that would overturn the overturn. Look at Texas. Their abortion law is WAY more strict than what Mississippi is doing and a lot fewer people are up in arms about it around the country than the democrats were hoping for.

It will be interesting to see whether Roberts is able to turn this into one of his patented non-decision decisions. His preference will be to flip one of the pro-life judges. But if he’s not able to, he will probably change his vote and then use his chief justice prerogative to assign himself to write the majority opinion.

The left is trying to paint the overturn of Roe v. Wadw as a cataclysmic event but it will have very little effect. The left-wing states already allow abortion until the time of birth. Here is New York for example

A bill signed into law in early 2019 adds additional protections for abortion access, such as allowing certain medical professionals who aren’t doctors to perform the procedure and allowing abortions past 24 weeks if the fetus isn’t viable or to protect the mother’s health (before the change in the law, this was limited to protecting the mother’s life).

The law also codifies a woman’s right to access an abortion, partly in anticipation of a possible rollback of federal protections under Roe v. Wade . Per the language of the 2019 law, “Every individual who becomes pregnant has the fundamental right to choose to carry the pregnancy to term, to give birth to a child, or to have an abortion, pursuant to this article.” Edit. The New York law was signed into law by the execrable Andrew Cuomo who, like Biden, styles himself as a practicing Catholic,

signed into law by the execrable Andrew Cuomo who, like Biden, styles himself as a practicing Catholic,

To be fair, Mario the Pious’ eldest son may have had a vested interest in keeping abortions legal. That is, in addition to getting the “choose death” vote.

Although Americans widely support abortion access in the United States, many activists worried about preserving the right to abortion say a pending Supreme Court decision could effectively end access in at least 20 states almost overnight. If that day comes — and they increasingly predict it will — activists fear the lack of public support from a broad group of Americans may prolong their fight to restore abortion rights.

Or, maybe they dont have the support they want to think they have?

Is it just me, or did they say almost the exact opposite thing in two sentences, back to back? Maybe they were quoting

Although Americans widely support abortion access in the United States

The article only tells part of the story. Approval of abortion depends strongly on the trimester of the pregnancy.

A new poll shows a solid majority of Americans believe most abortions should be legal in the first three months of a woman’s pregnancy but most say the procedure should usually be illegal in the second and third trimesters. 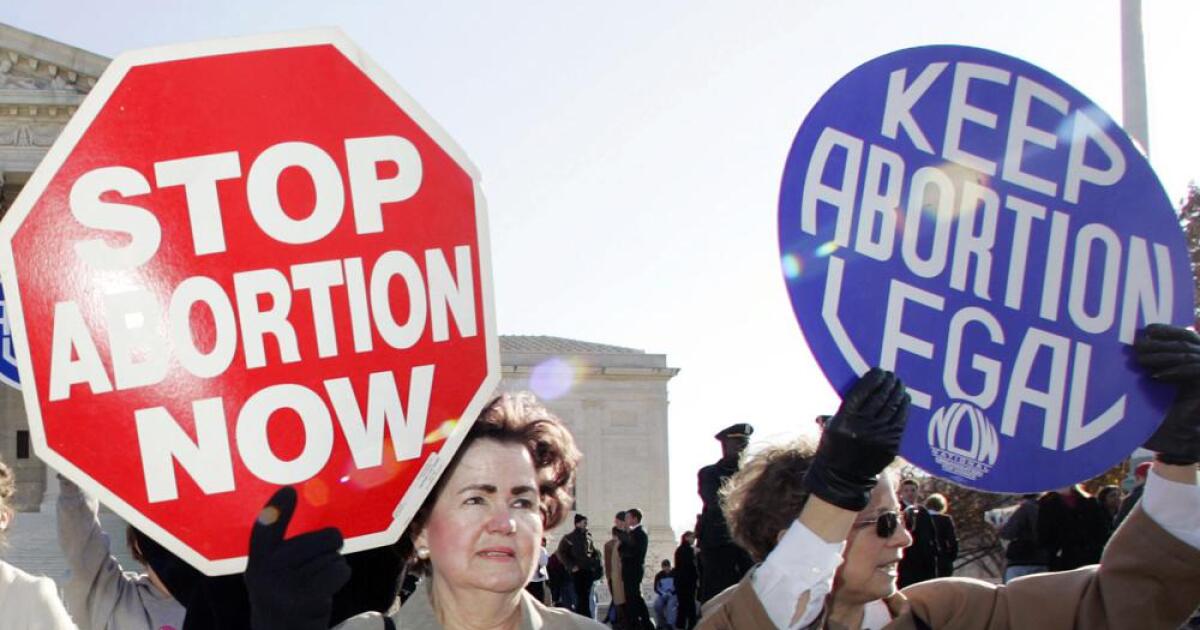 The poll comes weeks after the Supreme Court agreed to hear a case involving a currently blocked Mississippi law that would ban abortions after 15 weeks.

The California Future of Abortion Council’s report specifically has 45 recommendations for the state in a sanctuary capacity, including funding many abortion groups to provide care, funding support infrastructure at abortion clinics, improving Medi-Cal abortion policies, give more protections to those seeking abortions, and even help fund travel, lodging, and procedure costs for those otherwise unable to afford the procedure.

TL:DR
The “choose death” supporters suit can continue, but only against the TX officials who have authority over medical licenses.

All this ruling does is allow part of the case to continue. This does not block S.B. 8, or restrict it in any way. It also does not reinstate the injunction issued by a lower court to block enforcement. It also restricts the suit, brought by the “choose death” supporters, to the TX officials who have authority over medical licenses.

I find it surprising that the “choose death” spokesit (name withheld for obvious reasons) said “We’ve had to turn hundreds of patients away since this ban took effect, and there is no end in sight.” To me, this doesn’t make sense, as we’ve repeatedly been told how the “choose death” clinics were there for women’s health. Why would a death ban cause them to turn patients away?

You know… ignoring the “choose death” (LOL?) and the “enslave women” (LOL!) positions for just a second, the Texas law providing for “vigilante enforcement” is really, really stupid. I can’t believe it’s being allowed to stand. Does anyone here think that it makes sense and should be allowed? Explain to me how that should be legal.

Does anyone here think that it makes sense and should be allowed?

My main concern is that this monster that conservatives created will likely be used against them and the rights they hold dear. It is unlawful for California to ban the sale of legal firearms in the state, so they can’t. But they could create an identical law to Texas’s and swap out the words “anyone who facilitates an abortion” with “anyone who facilitates a firearm sale” and allow citizens to sue those folks. That would essentially close every single gun shop and FFL in the state just like this law has closed every abortion clinic in Texas. I’m much more supportive of the tactic Mississippi has taken. Roe and Casey are bad law and we may now have enough justices on the SCOTUS to admit that. Take the fight to the court and don’t shy away from arguing stare decisis is meaningless when the cases that would be upheld were decided wrong a la Plessy… Either come up with new law from the bench all over again to replace Roe and Casey (which is a bad idea, but still a step in the right direction) or throw out Roe and Casey altogether and let the states decide.

My main concern is that this monster that conservatives created will likely be used against them and the rights they hold dear.

They didn’t create it, such “laws” existed before (something about rewards for runaway slaves, IIRC).

Not the same. Those laws weren’t created because the states would have been stopped by the supreme court if they wrote a law saying the police could arrest black people roaming the countryside. On the contrary. Slavery was the law of the land. Those laws were just citizen arrest laws which, in general, are completely constitutional. SB 8 is completely uncharted territory.

but that it could be easily used against anyone for any unpopular reason without any legal repercussions.

I was just being realistic and serious. Look at the most contentious “rights” each side argues about and figure they each consider it “worth it” to use this nuclear option. Just because I picked one example I think would be most likely doesn’t mean that is the only one I would be concerned with. Oh how terrible of me to think that people on the left would try to take away gun rights with the same tactic and people on the right would be upset about it - both sides being completely inconsistent with how they are currently portraying this law.

While I don’t find humor in the “choose death” position, and am unfamiliar with the “enslave women” position, I can put them aside to discuss your “vigilante justice” stupidity a̶r̶g̶u̶m̶e̶n̶t̶ comment. I haven’t read the TX law so don’t know all of the details, but

My quote key is getting quite the workout.

It is unlawful for California to ban the sale of legal firearms in the state, so they can’t.

This may be a stretch, but is the “vigilante justice” aspect akin to a civil suit? I’m thinking of the Goldman’s suit against t̶w̶o̶ ̶o̶n̶ ̶t̶h̶e̶ ̶t̶h̶r̶o̶a̶t̶ O.J. Simpson. The “doctor/nurse/tech/witcher” only has to convince a judge/jury that he did not perform the crime.

Yes, except (in your example) the Goldman’s had equity in the case, a basis to bring the suit. Under this law, (i believe?) literally any uninvolved third party can jump in and claim the ‘prize’. It’d compare to a civil suit if it was only someone associated with the aborted baby that is allowed to bring suit.

I agree with scripta that the enforcement mechanism is a little dubious, but offering rewards for ratting out criminals are pretty common, too. The only difference in this instance is the rat needs to claim their reward from the court directly, rather than get it from the state/victim who then takes the offender to court.

I do say, with the only enforcement being by citizens after-the-fact, it’d seem that the ‘detect a heartbeat’ is a somewhat subjective standard that could be sidestepped rather easily. I’m not sure how Joe Citizen is supposed to retroactively prove that there was a heartbeat at the time of the procedure, if it was in the provider’s interest to not clearly document a heartbeat? If the doctor states “I did not detect”, how can anyone prove otherwise unless they were there at the time?