The West is trying to do some weird “oil price cap”, which clearly won’t work in a global market, but maybe makes them feel like they’re doing something other than watching Ukraine bleed.

Russian response this am -

So the energy market will get more fragmented and expensive, which will cost most for those least able to afford it. so the EU guys admit that

But blame the war instead of their own sanctions, etc. OK, well I guess global food security for the 3rd world is a price the EU is willing to pay, kind of like how the US and UK are willing to fight Russia to the last Ukrainian. The EU is definitely paying the price

The German economy is on track to contract for three consecutive quarters starting from this one, according to a Reuters poll of economists, following a dramatic spike in gas prices after Russia slashed deliveries to Europe. The Russian oil firm said gas supplies to the pipeline are completely stopped due to equipment issues. The energy giant gave no time frame on when it would restart the pipeline, which supplies gas to Western Europe.

As much money as Russia is making off of this deal, they may start a war twice per decade, unless they can keep these sanctions going for more than five years.

Pushing our enemies together longer term.

As much money as Russia is making off of this deal, they may start a war twice per decade, unless they can keep these sanctions going for more than five years.

this has been a net win for the rooskies, and the stalemate continues. Question is will this be long term like the Koreas.

Looks like the Ukrainians have mounted a relatively successful offensive in the East.

This is in addition to successes in the South striking Russian supplies and weapons behind the front line to good effect. Feels like it’s going to come down to who has better supply lines, and some of the Russian ones may be more vulnerable than was originally thought.

thrown off a boat, but was it out of a boat window? Executive defenstration watchers want to know. The death of an energy executive follows other mysterious deaths of businessmen across Russia the past few years. It’s Time to Prepare for a Ukrainian Victory

The liberation of Russian-occupied territory might bring down Vladimir Putin.

thrown off a boat, but was it out of a boat window? Executive defenstration watchers want to know.

It’s Time to Prepare for a Ukrainian Victory - The Atlantic

Analysis: The curtain protecting the dignity of Russia's military has been...

The tsar suddenly might have no clothes. It has been a startling week on both sides of the Ukraine and Russia border.

Or, how will Ukraine react to Ukrainian victory? Will they be able to finagle “rebuilding” money, or can they stand on their own, along with their current funding support?

I guess the question is if the Russians are leaving some of these places like this without as yet being attacked, The invaders' military equipment columns have already been seen at the checkpoint in Chongar. Russian invaders are fleeing the captured Melitopol,

Are they just going to give up, or are they going to start bombing everything or using tactical nukes? The Russian autocrat’s end has been predicted, wrongly, for two decades.

regardless of the outcome, no quick resolution in sight= markets turmoil and no safe haven like gold was back in the day.

Or, how will Ukraine react to Ukrainian victory? Will they be able to finagle “rebuilding” money, or can they stand on their own, along with their current funding support?

This is why you can’t raise capital for a free market solution to the EU energy crisis - if you make profits, they’ll just steal them. The European Union outlined a plan to redistribute about $140 billion from energy companies to consumers and businesses in a bid to cushion the blow of high prices stoked by Russia’s punishing assault on the continent’s economy.

The EU plan is intended to redistribute some energy companies’ windfall profits and revenue to cushion the blow of high prices for consumers. It marks one of the bloc’s most significant market interventions since the global financial crisis more than a decade ago.

The commission also wants to skim the profits of fossil fuel companies that aren’t covered by the revenue cap. The plan aims to raise €25 billion by demanding companies involved in oil, gas, coal and refinery activities fork over one-third or more of the money the commission deems excess profit. The proposal defines excess profit as taxable profits that surpass a 20% increase on average profits from the previous three years. Revenue from this part of the plan could be used to help vulnerable households, companies and energy-intensive industries, the commission said.

if you make profits, they’ll just steal them.

We’re so fortunate to live in the land of the free. Here, the Democrat tax_and_spend controlled congress will just try to pass a law to take that money.

This is quite a good if longer interview with a group that knows commodity markets well. Two short answers I thought were good, but the whole piece is worth a read. How Europe Stumbled Into an Energy Catastrophe

You thought the U.S. and European attempts to use economic sanctions to cut off Russian oil from the global market was a catastrophic error. Why?

We wrote a piece called “Crazy Pills” where we outlined our views in this regard. This is the type of insight that can only come from direct experience in the commodity sector. It intuitively feels right that if we just choke off Putin’s energy-export volume, we will choke off his revenue. But that’s just not how commodities work, especially when you’re the swing producer like Russia is. If you’re a small country and you produce a de minimis amount of energy and it’s choked off by a naval blockade, the rest of the world can make that up and it’s not a big deal. But when you are the single largest exporter of energy that the world desperately and critically needs, you hold all the cards.

And so here’s the example that we would use. Let’s just stick to round numbers. Putin exports 10 million barrels a day of oil. Assume we were to blockade the country of Russia — which, of course, is an act of war, but let’s just for the sake of analysis run the thought experiment. If we were to take 5 million barrels a day of this oil off the market, shut it in, blow up Russia’s wells, pick your favorite — the price of oil would way more than double, and Putin would make more revenue on the 5 million barrels of oil that are still finding a way into the market than he would lose by our cutting off the supply. It’s the same thing with natural gas. The price of natural gas in Europe today, despite coming down by 40 percent off its peak, is still seven or eight times what it is in the United States.

And if the price skyrocketed after Putin shut off the volume, well, that price is the benchmark he uses when he sells his gas to Asia via liquefied natural gas, or LNG. And so if you’re selling it for 40 and then you cut production and you sell half as much for 80, you’re coming out even. The price elasticity of demand in commodities is such that the only way to crush Putin’s revenue is to flood the world with energy. Oil was at -$37 a barrel when we had a lack of storage at the height of the COVID shutdown. That shows you how volatile oil can be.

During the first Gulf War, we went to all of our oil-producing allies and the coalition and said “Pump” because we were trying to rob Saddam Hussein of his oil revenue. The price of oil can be pushed down, but only with supply. So attacking his volume, which we have been loudly saying is a mistake from the beginning, has indeed proven to be a mistake. And I think the numbers are pretty definitive in this regard. August was perhaps a record revenue month for Putin, and this is how he’s funding his war machine.

Insane. The world cannot live without its energy. Again, let’s do the hypothetical and pretend we’ve surrounded the entire country of Russia and cut off all of its oil and gas to the outside world. The world would descend into energy starvation and mass death. The world literally cannot live without Russia’s energy, and we should not want them to. We should be flooding the market with energy. Every molecule that Putin’s willing to sell his enemies in Europe should be accepted.

By the way, we believe that Putin would not have moved into Ukraine had natural gas not already been a crisis. This is the part people forget. The price of natural gas skyrocketed in December in Europe, long before he moved into Ukraine. He likely did the calculation and realized, They don’t have enough molecules. They’re surely going to come to the table and give me what I want in Ukraine. He moved into Ukraine. He was incorrect — they didn’t come to the table. And here they are, weaker than they were if they had. And so he miscalculated Europe’s response. And I think he overestimated the long-term impact of his play. In the medium-to-long term, we think his invasion of Ukraine is a catastrophe for him and for Russia, but in the near term, winter 2022–23 …

But … but … they have energiewende Electricity producer prices up 174.9% on the year Excluding energy, August up only 14% year-on-year Only?

Russia doing a “partial war mobilization” to call up extra troops. Also pulling back some of their military from Syria, etc, to fight in Ukraine. 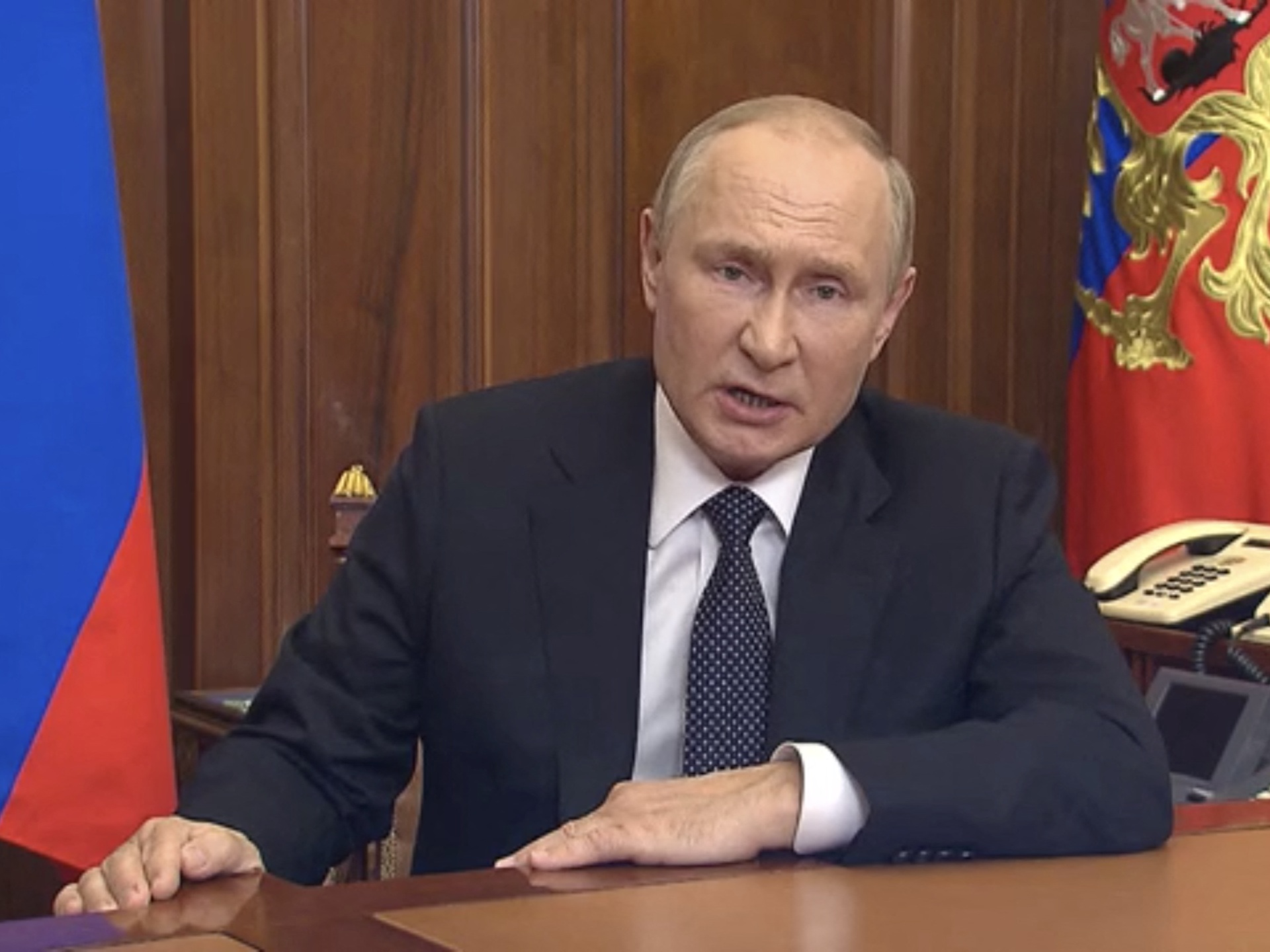 The Russian president says he is defending Russian territories and the West wanted to destroy the country.